An Argentine football player was arrested after punching a female referee in the back of the head during a match between Deportivo Garmense and Deportivo Independencia in a regional league in Buenos Aires.

In interviews with local media outlets, referee Dalma Magali Cortadi said she had awarded a foul against Garmense player Cristian Tirone -- who a police source and a Garmense source told CNN was the aggressor -- who then began to verbally abuse her.

As a result, Cortadi says she decided to show Tirone a red card, at which point he ran up behind Cortadi and struck her in the back of the head, causing her to fall to the ground.

In video footage of the incident, Tirone had to then be forcibly pushed away from Cortadi by two of her officials, before being escorted off the pitch by several police officers.

As a result of the attack, Cortadi had to be taken to a local hospital, and once she was discharged, she made a criminal complaint against Tirone.

CNN has tried to contact Tirone via the police, but has so far been unsuccessful.

The police source told CNN that Tirone is being held at a police station in De La Gama, the town where the attack occurred. The player is incommunicado, the source said, and it is expected that he will be transferred to the Prosecutor's Office to give his statement.

After giving his statement, it will be determined whether or not he is detained and what the charges against him will be, the police source told CNN. 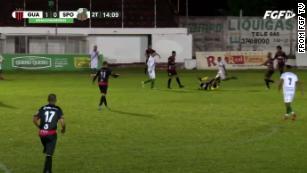 In a statement, the Argentina Football Association (AFA) said: "The AFA repudiates and condemns the actions of the player Cristian Tirone (Dep. Garmense) towards the referee Dalma Cortadi, who was the victim of physical violence during the second half of the match.

"This House, together with the Federal Council, will address the issue and accompany the judge throughout the process, strengthening the guidelines on this type of behavior that our association will not tolerate.

"It should be noted that the incident will be transferred to the Disciplinary Court to apply the corresponding sanction to the player and that these aberrant events will not be repeated in any other of our football stadiums. Likewise, the Department of Equity and Gender, led by Dr. Paula Ojeda, is in constant dialogue with the victim and is fully available."

In a statement, Tirone's club, Garmense, said it "expresses its energetic repudiation" of the attack.

"The institution expresses its solidarity with the official who was attacked, expresses its apologies, makes itself available to her and commits to continue working to eradicate violence in all its forms and train athletes with values such as: discipline, camaraderie, commitment and, above all, respect and tolerance," the statement added.